Yukari Sendō (仙童 紫 Sendō Yukari) is a Witch and the daughter of Fujiko Sendo, her mother and her father, Tamanori Sendo and a third-year student at Yōkai Academy, and the first Witch to join the Newspaper Club, the second being Ruby Tōjō. She initially hated Tsukune Aono, claiming that she had fallen in love with Moka Akashiya and used her magical powers to try to drive them apart. However, after both Tsukune and Moka save her from bullying classmates, she falls for him too. Her obsession with both has driven her to try to create a three-way relationship between them (though shortly after Fang Fang's introduction, she attempted to create a larger relationship involving Kurumu and Mizore as well.) Yukari has, on occasion, developed some bizarre items, often leading to funny results or far-fetched situations. Her name "Yukari" which is "紫" can also be pronounced as "Murasaki", and can be translated to "purple".

Yukari tends to have a playful personality. Seeing as she started high school when she was eleven, this is not much of a surprise. She is very cheerful and optimistic about most things. When she initially went to school, the other students were ruthlessly prejudiced against her, hurting her feelings and causing her to lash back at them with pranks. Yukari often gets into arguments with Kurumu over whether it is better to be flat-chested, but she seems to embrace her flatchested-ness. Her name "Yukari" which is "紫" can also be pronounced as "mursaki", and can be translated to "purple".

Despite being young, Yukari seems to "swing both ways" when it comes to love; she cares for Tsukune and Moka equally. As she is flat-chested, Yukari joyously squeezed Moka's own, claiming that compared to her own, Moka's breasts are a dream to have. Unlike the other girls, by the time Fang Fang was introduced, Yukari has become accustomed to the idea of being a harem and doesn't want Tsukune to end things.

When Yukari's personality had been switched into Fang Fang's body with her Ishin Denshin, she became unsure of herself. She began to think that Tsukune viewed her as a younger sister and "not a woman". Tsukune, however corrected her (Thinking he was talking to Fang Fang) and told her how her knowledge and magic had saved them numerous times and that she was one of his most-trusted friends.

This admission caused Yukari to tear up before she admitted that she had needed the Ishin Denshin because she had never conveyed her feelings to Tsukune. She then admitted to Tsukune (While she appeared to be an older version of herself) that she loved him.

Yukari is the shortest in the group besides Kokoa Shuzen. She has short black hair and purple eyes. At school, she wears does wear a uniform, but instead, a witch's typical outfit or properly, "witch's outfit", but she still sports the same uniform skirt. She wears a black witch hat that droops down sometimes, a pink top, and a pink corset. She wears the green checkered pleated short skirt all female students wear, and wears bright pale yellow over the knee socks, and brown shoes. In the second serialization, her "uniform skirt" had an undergo from the skirt of the school's uniform to a dark-colored waist-length-to-belly-length skirt or "shirt-holder" which its color is unknown due to the manga illustrations appearing in black-and-white. She's usually more than not seen holding her magic wand.

In Capu2 in the anime, when she turned older, her uniform was a plain, white shirt, with a red bow tie, and a yellow ribbon on/in her hair, the green pleated skirt that all female students wear, and short low-heeled "flats" that are "Mary Jane" black shoes.

When she first got to Yōkai Academy, the students there were prejudiced against her because she was a witch. Yukari bottled up her feelings of loneliness and hurt, and began getting revenge on the other students by pulling pranks on them. By the time of the midterms, Yukari had seen Moka numerous times and had fallen for her. After being saved by both Moka and Tsukune from the Class President, she decided that she was in love with both of them; she also joined the Newspaper Club.

Around June, Yukari was next seen dropping objects on Gin and Kurumu's heads to keep them away from Tsukune and Moka. She also interrupted one of Tsukune's chances to ask out Moka. By the 21st, Yukari was helping with the missing girls case and found a dread energy clinging to Tsukune and Moka via her crystal ball. Knowing her predictions were normally right, Yukari was relieved Tsukune was safe prior to him figuring out Ms. Ishigami was behind the case. On Tsukune's birthday, Yukari gave Tsukune a voodoo doll as a gift.

She was later stuck in the Newspaper Club during the weekend to get the July edition finished. The club's hard work was nearly ruined by a slug monster obsessed with Kurumu (who even read the diary on her laptop). However, the paper was successfully finished prior to Monday morning.

Yukari then helped hand out papers to the students, ending up being chased by boys who liked how cute she was. The Public Safety Commission arrived and trashed the newspapers because they didn't pay a bribe to hand them out. Yukari later helped mend Tsukune's wound from Keito's attack on them.

When Yukari first heard the charge about Tsukune being human, despite Kurumu's thinking that the charge was absurd, Yukari said that Tsukune's wound was healing so slowly...just like a human. Despite realizing that the charge was highly valid, Yukari still went to the Enforcers shrine-like base to save Tsukune, proving that even though Tsukune was human, his kindness had made a big enough impression on her to look past humanity's cruel mistreatment of witches for the sake of her good friend.

Yukari met Fang Fang Huang who she thought was an idiot. When Fang Fang switched their personalities with the Ishin Denshin, Yukari saw herself from another point of view and became filled with anxiety. When Tsukune misunderstood Yukari's bid (while in Fang Fang's body) to reclaim her own body, Yukari had an emotional meltdown. Voicing all her fears about how Tsukune viewed her, Yukari was shocked when Tsukune rebuked her (thinking he was talking to Fang Fang) for that viewpoint. He then affirmed his value of Yukari and that he trusted her implicitly. After time passed, she became more understanding toward Fang Fang and eventually became his friend. She actually worries about Fang Fang about his leadership of the Huang family and when he is injured.

When Akua announced her bid to help Tsukune after he'd removed his Holy Lock, Yukari realized the intention wasn't to revert Tsukune to a human, but rather to give him the final push to help him become someone capable of controlling his powers. When she said this Fang-Fang was seen with a confused/baffled expression. She then joined circle of friends to help Tsukune and Moka. When the smoke cleared showing Tsukune and Moka alive as fully realized Shinso, Yukari was part of the celebration for their survival.

Yukari's first appearance was in episode 3, when all the students are reading the test ranks and she comes first. She later injures Tsukune Aono while he is in the infirmary. She uses a voodoo doll on Kurumu and makes Tsukune touch Kurumu's breasts and pull down her panties whilst Moka Akashiya is in the room. She gets caught by the three and later bumps into the Lizardman. She gets taken to the forest to be eaten but saved by Tsukune, Moka and Kurumu, then she falls in love with Tsukune. In episode 9 she meets a fellow witch called Ruby Toujo who thinks all humans are the enemy. But eventually the group convinces Ruby that's not the case.

Yukari meets a nurse who charms her and makes her more developed. But in the end, Yukari learns that Tsukune only cares about what's on the inside, so she decides to go back to her old self.

Yukari has a sad history. She was always wanting to pull pranks and monsters hated her because she is a witch. She got picked on by lizardmen, a form of lizard monsters, for being a witch. Inner Moka and Tsukune save her, though. She was then not only in love with Moka but Tsukune as well.

She gets along with Fang Fang, but calls him an idiot. In the anime, a bunch of Lizardmen take her, pushed to her back to a tree, and prepare to eat her. Moka and Tsukune save her from this.

In the manga, Yukari and the group go to visit the Snow Village where Mizore Shirayuki is from. She meets Kahlua Shuzen who can transform her arm into a bat wing, and Yukari states that vampires can change into animal form, but the ability is lost due to their vanity. Yukari survives Kahlua's blows, and then learns of the Belmont Whip that Ruby had for Tsukune.

Witch Physiology: Yukari is essentially a borderline yokai where witches are basically humans capable of magic and thus is seen as half yokai and half human. As a Witch, Yukari can cast various spells through her magic wand, with her motif usually revolving around tarot cards and washtubs. Due to her kind having a body identical to that of a human, their physical prowess aren't high compared to other yokai though they make up for this with the magic they wield.

Expert Spell Caster: Yukari is quite powerful as a witch in spite of her young age and has great potential given the right motivation, one instance is when she defeats an army of monster plants by herself during the Witch's Knoll Arc.

Genius Intellect: Yukari is noted as the smartest student in all of Yokai Academy being able to skip a couple of grades to be in the same class as the older members of the Newspaper Club. Due to Inner Moka being the only one to solve a legendary math problem that is said to be solve only by Yukari, then it can be assumed that only Inner Moka can rival or even surpass Yukari in intellect out of the entire student body. In fact even someone as cunning as Hokuto Kaneshiro acknowledged Yukari's intellect, praising her for it in that with her perception things progress much quicker. Also her intellect allows her greater talent and understanding than most of the other Newspaper Club members.

Expert Summoner: During the one month training with Fang Fang, she self-taught herself the Summoning Techniques and became far better at it than Fang Fang. However if she over uses the techniques, she lose stamina very quickly since it requires a lot of yōkai energy as noted by Xia-Long Miao to be a beginner's mistake. Though despite this Yukari shows enough expertise in the art to compete against a summoning prodigy like Xia-Long Miao despite having trained for only a month something commented on by his servant, Routier.

Magic Spells: Yukari's magic spells are centered around a certain theme like most witches though most of them are more for comedic relief rather than practicality or combat probably due to her young age. ====

Summons: Most if not all of Yukari's summons are based on insects which makes it a perfect counter against Xia-Long Miao's flower summons. ==== 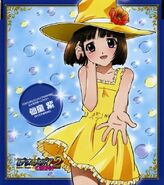 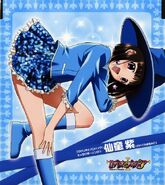