Wealth of Power is an ability that enables Vampires to change their shape into almost any form that he\she wishes, such as a wolf, mice, bats, mist, or other forms known to folklore.

Despite the power's tremendous potential, the vampire's obsession with creating and sustaining an aesthetically-pleasing appearance has led to the abandonment of this innate skill, such like with Kahlua Shuzen as she's able to transform her right arm into razor sharp bat wings after removing one of her limiters. Tsukune Aono and Moka Akashiya transformed in becoming fully stabilized Shinso Vampires thanks to their friends and are capable of growing bat wings from their upper backs. Akasha Bloodriver was able to grow gigantic bat wings using this power upon her revival from the Rosario Cross.

This ability is also shown when Tsukune was in a modification ritual which unleashed his vampire blood and turned him into a Jet Black Monster that has Ghoul instincts and Alucard's potential. 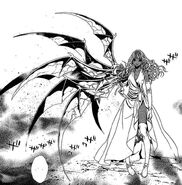 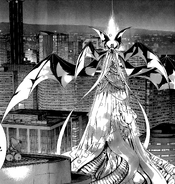 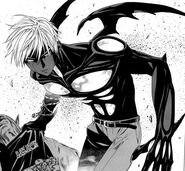 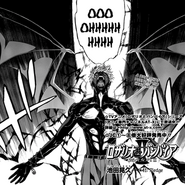 Add a photo to this gallery
Retrieved from "https://rosariovampire.fandom.com/wiki/Wealth_of_Power?oldid=26917"
Community content is available under CC-BY-SA unless otherwise noted.