Often mentioned in the folklore of various cultures: a monster that sucks the blood of humans and livestock. Possesses high battle capabilities and is not easy to kill. Its strength is one of the greatest among monsters. On the other hand, vampires have many weaknesses such as being weakened by rosaries and water. Also known as the Immortal Ones.

This description is repeated many times throughout the show whenever inner Moka comes out, but as seen with the Shuzen family, the appearance of a vampire can vary greatly, from having light to dark skin and hair of all types and colors. An example of this is Kalua and Kokoa, who happen to be full-blooded sisters, have a vast difference between them in that while Kokoa has fair skin, green eyes and dyed-red hair, Kalua has dark skin and long, blonde curly hair. The only thing that can physically distinguish a vampire from a human are their fangs, red eyes and their unnatural toughness. Even so, vampires are rarely seen in public, as they tend to keep to themselves. Despite this, many unlucky students of Yōkai Academy immediately recognize Moka as a vampire once she is unsealed by Tsukune, using the description above, due to their fame.

They are often referred to as a singular species, there are actually a number of varieties of the species, sharing many similarities as well as distinct differences. Variants include the converted "temporary Vampire" the infamous Ghoul, and the powerful Shinso.

"A monster of legendary strength... that permanently infuses his own body with Yōkai. If they're pure-blooded, their combat abilities stretch well beyond imagination. They live apart from other creatures, either human or others monsters, for they're feared by everyone." - Lady Oyakata

As the most feared and renowned species of monsters, the Vampire have a variety of abilities as well as a number of basic ones shared across all members of the species. The specific abilities that an individual possesses can vary as much as his or her appearance, personality, preferences, and fighting styles. Some individuals might use the versatile but shunned shape-shifting ability, such as Kalua Shuzen, or employ weapons to maximize their efficiency in combat, such as Kokoa Shuzen. Others such as Moka Akashiya and Akua Shuzen rely instead on their fighting skills and techniques instead, employing those alongside the generic abilities shared across the species.

As being one of the strongest monsters, they ironically also have the most weaknesses such as water, crosses, etc. Due to water's purifying properties, it is the Vampire's greatest weakness, it disrupts their yōki channeling ability to the point where they cannot summon up their usual battle strength, and it also delivers a shock to the physical body not unlike being struck by an electrical current. To get around this, Vampires uses devil herbs and mixtures to dilute the water to a useable level for baths and cooking.

Silver is the next weakness that can affect Vampires, particularly blessed silver similar to Moka's rosary cross. Her cross in particular drains her yōki at an incredible rate, thus sealing it. This is seen when a doppleganger takes Ura Moka's form and Tsukune uses the rosary cross to weaken that said doppleganger.

Other weakness such as garlic and sunlight are not a great issue since garlic can be avoided and sunlight has little effect other than being able to give a light sunburn. In regards to Tsukune, he is not subject to many of these apparent weakness, especially noted that water has no effect on him when he uses his power. This is because while his blood is partially vampire, his body has not changed that much, thus retaining his human resistances to water. However, it stands to reason that a silver-tipped/bladed weapon might have much more of an effect against him than a regular weapon would. (the weakness of silver may only apply if it is enchanted, the same for crosses.)

Note: If one simply backtracks the legends of vampires far enough, they will find that the oldest legend of vampires have them shown right alongside the oldest werewolf legend, suggesting a long-standing alliance or partnership between the S-Ranks of Power & Speed. 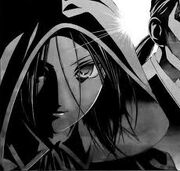 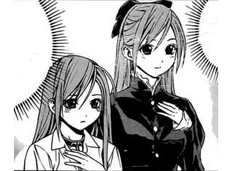 Moka and her mother Akasha 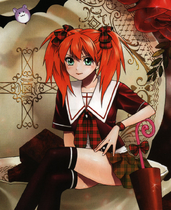 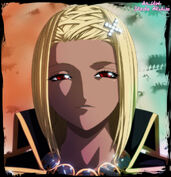 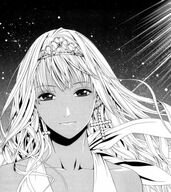 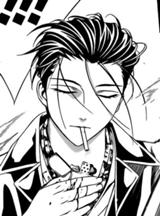 Issa
Add a photo to this gallery