Tsurara Shirayuki (白雪 つらら, Shirayuki Tsurara) is the wife of Mizore's father and the mother of Mizore Shirayuki who comes to the Academy's festival under the belief from her daughter's stories that Tsukune Aono is Mizore's boyfriend.

Exclusively in Rosario + Vampire Capu2, Tsurara and Ageha Kurono hold a big grudge against one another, being rivals for the affection of a student during their days as students at Yōkai Academy. In the manga, this grudge doesn't exist, aside from times in the Omake of the season 1 manga book 9 when they bickered about who daughter would be a better wife for Tsukune and the time in season 2 that they held each other at gunpoint (in Ageha's case, at nail-point) during the ensuing chaos on field day. She also runs a ski resort in the human world. (the resort is Anime canon only)

Tsurara has the appearance of a very youthful and gorgeous woman with purple silver hair that is tied up in a bun with bangs that resemble Mizore Shirayuki's hair, blue-purple eyes and a lollipop in her mouth, which keeps her body cool in warm climates.

She wears a white kimono with a purple obi sash and tabi white socks with black zōri sandals.

During her enrollment in Yōkai Academy, she let her hair down and wore a plain white shirt, a green suit jacket (like Moka Akashiya's), the green pleated skirt all female students wear, long white knee socks and shoes.

At first, Tsurara comes off as a calm and peaceful person, but can be cruel and sneer at others given the right provocation. She does have a temper that flares up dangerously if she's drinking something, such as creating sharp shards of ice when things aren't going the way she wants. Rarely, she'll show surprise on her face like when Tsukune Aono stood up for himself and Mizore Shirayuki after the Snow Oracle kidnapped Mizore.

As a Yuki-Onna (雪女 snow woman), Tsurara has almost complete control over ice at will. Obviously, this means she can freeze and then control any form of water or water based attack. She can form ice spears and wrap ice around her body, usually used in the form of ice claws. It can only be presumed that Tsurara is greater or on par with her daughter when it comes to their individual skills. She is also shown to be more resistant to heat than her daughter as she is able to enter the hot spring with little difficulty. That is because she iced the water around her and dropped the hot spring temperature overall (Again, hot spring scenario is Anime canon only).

In the manga, she was shown to be an expert sniper as she snipes down Ling Ling Huang's Jiang Shi team by using a sniper rifle loaded with ice bullets during the Yōkai Academy Athletics Festival.

Though never mentioned directly, there are several hints given, revealing her age. For Tsurara is described as being very obedient to rules, it can be assumed that she was immediately married when reaching the age of 17 and started having children right away (Mizore). Now, as Mizore is close to her 17th birthday, one has only to do simple mathematics to conclude that Tsurara is about 34 years of age, which is still pretty young. Given the fact that in school they were in the same class as Tsurara, Ageha Kurono and Fujiko Sendo should also be at the age of 34. In the anime, Tsurara was willing to have sex with (or at least seduce) Tsukune, despite knowing Mizore loves him and being married. While she does flirt with Tsukune in the manga, it is rare.

A shocked Tsurara drops her lollipop

Tsurara as a high school student at Yōkai Academy 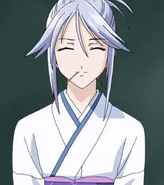 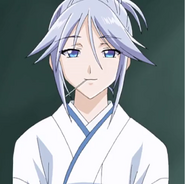 Mother visit
Add a photo to this gallery

Tsurara and the Gatling gun
Add a photo to this gallery
Retrieved from "https://rosariovampire.fandom.com/wiki/Tsurara_Shirayuki?oldid=31306"
Community content is available under CC-BY-SA unless otherwise noted.