Expert Hand-to-Hand Combatant: Due to Tsukune's kindhearted and rather naive nature, he initially possesses no combat skills at all. After gaining permanent vampire blood and the Holy Lock, he would rely solely on the temporary burst of vampiric strength along with simple punches and kicks to win his early fights which mostly contributed to the fact he caught his opponents off guard then. On the other hand well-trained and experienced fighters like Hokuto Kaneshiro, the Phantom Thief, and Akua Shuzen are able to easily outmaneuver him while criticizing that his movements were amateurish and akin to a wild animal/beast due to his initial lack of training and lack of fighting experience. After his training with Moka and Ruby, Tsukune drastically improved his hand-to-hand combat skills to the point of defeating several armed gangsters in the human world without much effort with Mikogami noting that he was too much for them to cope with. After training with Touhou Fuhai, Tsukune proved capable enough in his skills alone to defeat Kuyō and even stand up to Akua Shuzen by himself for some time and, with Moka's help, managed to ultimately defeat her despite holding back. However he silently admitted that he would have been killed several times by Akua had Moka not helped him and Akua was also holding back due to not wanting to hurt Moka. Later on, during his duel with Gyokuro, Tsukune in his second release mode exhibited greater hand-to-hand combat skills and was able to overwhelm Gyokuro alone. During his sparring match with Issa Shuzen, Tsukune managed to last against the Dark Lord-like vampire for 30 seconds, which Moka counted as an impressive feat for him though in the end he was no match for Issa who ultimately defeated him with ease and Tsukune was unable to do any harm on the older vampire and was left as a bloody mess after their fight.

Indomitable Will: He is virtually unstoppable in his drive towards any given goal, such as saving Moka or any of his friends, it doesn't matter if it will cost his life or not. He will go on regardless of any danger, even when he faces great physical and emotional pain he will refuse to surrender no matter how much the odds are against him, and he will push himself past any limitation he might have. By his own free will, Tsukune sacrifices his humanity and becomes a true vampire due to his love for Moka.

Diplomacy: Tsukune has been shown numerous times to be a skilled negotiator and orator, being able to sway others into rethinking their actions. This combined with his kind heart and natural charm makes him the perfect candidate to replace Mikogami as Yokai Academy's headmaster.

Youjutsu Expert: Tsukune originally relied on yōki-enhanced physical blows should he ever needed to fight himself in regards to using his vampire powers. After Tsukune had his body reconstructed by Touhou Fuhai in order to use Yōkai techniques, he began an intense training regimen under Fuhai to control and utilize his new power. He can now use yōki attacks of much greater power than before, rather than simply using yōki-augmented punches and kicks. Tsukune even became a powerful practitioner of Youjutsu, as shown when he uses what appears to be a "barrier" based attack in order to escape from the meeting of the Fairy Tale divisions listening to Gyokuro Shuzen. His knowledge of Youjutsu is also noted, having been trained by Touhou Fuhai in methods to counter the Jigen-Tou. This new skill allowed him to render Akua Shuzen's Jigen- Tou impotent and stand up to her. 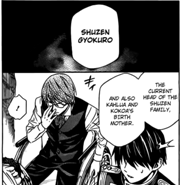 Tsukune injecting blood into Moka
Add a photo to this gallery
Retrieved from "https://rosariovampire.fandom.com/wiki/Tsukune_Aono/Skills?oldid=30814"
Community content is available under CC-BY-SA unless otherwise noted.