Touhou Fuhai (東方 不敗, Tōhō Fuhai) is the great-great grandfather of Fang Fang Huang and Ling Ling Huang, and one of the Three Dark Lords. Moka Akashiya and the rest of the Newspaper Club travel to China and seek him out so that he may repair the Rosario Cross around Moka's neck. He is also a old friend of Moka's mother Akasha Bloodriver and a self-proclaimed 2D Otaku.

His name literally means "Undefeated of the East" in Japanese and Chinese.

Touhou Fuhai's true form is that of a younger and taller bishonen version of himself with long black hair. However, he normally keeps himself in the form of a small old man, which aids in suppressing his energy as much as possible to preserve what little life he has left. In his true form he wears a white, bell-sleeved robe with a more decorated black robe beneath. He has black shoes and a tattoo on his chest that appears to be a sun.

﻿In the manga, Touhou Fuhai is said to be the most sensitive out of the three Dark Lords, as well as the easiest to anger compared to the kind Akasha and fairly relaxed Mikogami, and has an attraction to 2D manga, particularly the female characters. Like Gin, he is somewhat a pervert, he was even willing to make a joke about Akua's lack of "womanly development" since seven years ago during the middle of a fight with her. He seems not to tolerate disrespect and insolence well, and said himself that he is very impatient.

He is very insightful, taking notice of the situations he is placed in and responding accordingly without needing much time to think it over, and also fairly manipulative, as he was able to get Inner Moka to cosplay for him with the latter skill. his insight also makes him highly adaptive and a very cunning and tricky opponent for people he's already seen fighting in the past, having seen Issa's techniques over half a century before, he is now perfectly capable of dealing with the Shuzen Head Vampire without much effort, though later "Issa" turned out to be a doppleganger who was much weaker than the real Issa Shuzen. Indeed, immediately after seeing Akua in battle he began formulating ways to defeat her and even taught them to Tsukune within a month, showing that he's as good a teacher as he is a learner.

Yasha Physiology: As a yasha Touhou Fuhai possesses standard powers amongst his kind but as one of the Three Dark Lords, his powers are much more advanced and possess a far greater degree of effect. These are some of his powers:

Master Hand-to-Hand Combatant: Touhou Fuhai is known to possess immense knowledge and fighting prowess. When he fought Akua Shuzen he was able to go toe-to-toe with her without using his true power when she herself was. Touhou Fuhai is even able to easily pressure and defeat the 2nd Sub-Division Leader of Fairy Tale who had duplicated Issa Shuzen's powers (albeit Touhou himself admitted that the real Issa Shuzen was much more powerful) whilst declaring that he had he seen through all of Issa's fighting style 50 years ago.

Medical Master: During the process of the Human Modification Technique on Tsukune Aono, Touhou Fuhai demonstrated intricate and thorough knowledge of the human anatomy that allowed him accurately pierce Tsukune's body with 109 acupuncture needles imbued with Yoki. The Dark Lord was able to do this quite effortlessly even when he was jumping around Tsukune thus showing incredible precision with acupuncture. When Tsukune was distracted by Kurumu he proceeded to accurately pierce the latter's heart with the last needle without killing him despite claiming that the last one was the most dangerous of all which indicates that Touhou Fuhai may have some expertise in chinese medical acupuncture.

Black Arts Master: Touhou Fuhai is said to be the most powerful black arts practitioner in the world being able to cast powerful spells in sealing and barriers. A testament to his prowess in black arts is that he taught fellow Dark Lord Tenmei Mikogami all that he knows of black arts. The newspaper club also sought his help in repairing Moka's rosario when the damage was beyond Mikogami's capabilities which he detected within a single glance and proceeded repair in an instant during Akua's attack without anyone noticing.

Yojutsu Master: Touhou Fuhai is also well versed in demon arts as he invented many of his personal techniques one of which is the ultimate blade known the Hougetsu Jigen-Tou which Akua Shuzen sought to learn in order to defeat Akasha. Though he commented that he was impressed by her use in the Jigen-tou (in which he notted that she had mastered it as if it was her own technique) but was still nowhere close to his level of mastery. He even invented a counter technique made specifically for the Jigen-Tou that both Akua and Tsukune had remarked that he is a genius. His youjutsu prowess is shown in his ability to train Tsukune to become a powerful youjutsu practitioner in a month after modifying the latter into a modified human enough to stand up against Akua Shuzen on his own for some time.

Master Summoner: As a yasha, Touhou Fuhai has the ability to summon creatures to fight on his behalf with many recognizing his talents for it that they expected Fang-Fang to inherit this talent in summoning. 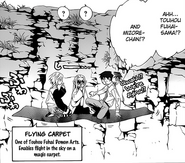 Soap Opera
Add a photo to this gallery

Retrieved from "https://rosariovampire.fandom.com/wiki/Touhou_Fuhai?oldid=29187"
Community content is available under CC-BY-SA unless otherwise noted.