Start a Wiki
Tamao Ichinose (一ノ瀬 珠魚? Ichinose Tamao) is in charge of the Swimming Club. At first she seems gentle and sweet, but she uses her body to lure males into the swimming club and then sucks the life energy out of them. Why Tamao is allowed as the leader of the Swimming Club is unknown.

Later on, Tamao graduates from Yōkai Academy. Like Ririko, due to Tsukune's scent, she is in love with him, Tamao even admitted right in front of him. She is also an elder or senpai to Tsukune and the rest of the Main Girls not counting Ruby as Tsukune called her "Ichinose-senpai" when first encountering her in the pool. This most likely means she is a sophomore at age seventeen in Season I of both the manga and the anime.

Tamao has turquoise colored hair along with having fair skin and yellow colored eyes. Her hair appears black in the manga. When transformed her mouth expands and becomes scaly, along with her teeth becoming jagged and shark-like. Her legs and feet also transform into an orange colored mermaid tail. Her hands become webbed, allowing her to maneuver through the water.

Being a mermaid, Tamao relies on her beauty to lure her victims into the pool and sucks the energy. She seems to get offended when people call her a tiny fish-as she was enraged when Moka called her a minnow-or comment on her fishy smell.

Mermaid Physiology: As a mermaid, Tamao is an aquatic yokai being nearly invincible while in the water and being a yokai that specializes in alluring men like a succubus. In fact as a mermaid, she is considered to be a dangerous enemy towards a vampire like Moka since vampires are weakened by water.

Despite being nearly "invincible" in water, mermaids are powerless when out of it. This is shown when Tamao Ichinose is in mid-air and is beaten soundly by Moka, showing that they are not agile out of water. 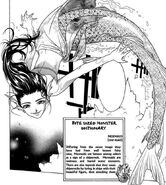 Mermaid Notes
Add a photo to this gallery
Retrieved from "https://rosariovampire.fandom.com/wiki/Tamao_Ichinose?oldid=30075"
Community content is available under CC-BY-SA unless otherwise noted.