Sirens are a mythical half-man half-bird creature from ancient Greece that lived by the sea. Originally, they were referred to as a god whose singing voice had the power to disrupt the minds of those that listen to it. In fact this creature is the root word of the English word "Siren."

The appearance of a Siren varies depending on the individual, but they generally appear as dominantly Human in form, unless in their two monster states. In their monster form, a Siren appears as a Human with large white wings, giving them the appearance of an angel. Another feature, at least seen in a male of the species, are double-jointed legs, with the legs below the first joint being very bird-like, albeit noticeably rough and jagged.

A female of the species may or may not possess this feature, though it's possible the appearance of San Otonashi when she fought Kanade Kamiya may have more to do with her preference, as not to overly disturb her mother figure, Marin.

In addition to their semi-human base-line form, a Siren is also possesses an unnamed advanced form, which is a type of 'power-amplifier', not all that dissimilar in purpose and function to the advanced form of another monster, the Japanese Yōko and its "Battle Form." The advanced form of a Siren takes appears as a kind of muscular, armored, hulking reptilian creature with powerful jaws, large sacs around the throat, and a number of attendant vent structures. The wings are curved upwards, and appear smaller due to the enlarged state of the Siren's body.

Whether or not this is an ability possessed by both genders of the species is unknown, though it could be a trait unique to the males of the species, since only Kanade Kamiya was seen using it. The downside to this transformation is the destruction of upper body garb. 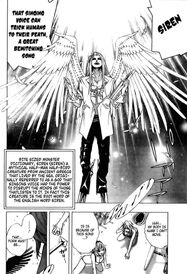 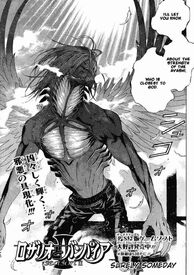 Retrieved from "https://rosariovampire.fandom.com/wiki/Siren?oldid=30897"
Community content is available under CC-BY-SA unless otherwise noted.