Start a Wiki
The Shuzen Family (朱染家, Shuzen-ka) is the strongest and most powerful Vampire family in the known world of Rosario + Vampire. Many around the world fear the name of Shuzen, while vampires from across Japan gather together at the Shuzen Family estate. Mostly all vampires in the country of Japan that are guests and ones that drop by once in a while at the family household are related to the Shuzen Family.

After Fairy Tails last stand and its collapse much of the Shuzen family was killed when they were turned into the Black Parade.

The Four Daughters of Issa ShuzenEdit

Other members of the Shuzen Family 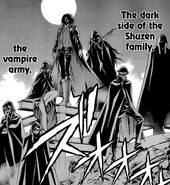 Issa Akasha Moka
Add a photo to this gallery

Retrieved from "https://rosariovampire.fandom.com/wiki/Shuzen_Family?oldid=30544"
Community content is available under CC-BY-SA unless otherwise noted.