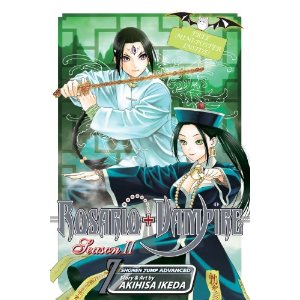 With the rosario broken, Moka agrees to travel to Hong Kong to meet with Fangfang and Lingling's great-great grandfather, Tohofuhai, one of the Three Dark Lords, in order to get her rosario repaired. During the flight, Tsukune and the gang must deal with a gremlin assassin from Fairy Tale that multiples itself to chew up the plane, causing it to crash. At the Huang manor, the girls are kidnapped, but it turns out to be a ruse to welcome Fangfang and his "new friends". Tohofuhai examines the rosario, but as he tries to crack its protection scheme, the seal rebounds and sucks in his soul, as well as Tsukune's and Mizore's. They end up inside Moka's mind, where they see memories that the seal is keeping from her. The memories include when Moka meets her eldest sister Aqua Shuzen for the first time, as well as Moka's mother, Akasha Bloodriver, who looks just like Moka's outer personality.

Retrieved from "https://rosariovampire.fandom.com/wiki/Rosario_%2B_Vampire_II_Volume_07?oldid=26175"
Community content is available under CC-BY-SA unless otherwise noted.