Ririko Kagome (籠女 李々子 Kagome Ririko?) is a teacher at Yōkai Academy, specializing in mathematics. Like Tamao due to Tsukune Aono's scent, she is in love with him. In the English dub of the anime, she is called "Ms. Ririko" or "Miss Ririko" rather than "Miss Kagome".

Seemingly innocent and deeply concerned for her students' grades, she offers private lessons to anyone willing, though at a price.

Kurumu Kurono has stated that Ms. Ririko is a "little weird". According to her, Ms. Ririko's really passionate about teaching but has a one-track mind. This causes her to "go overboard with everything" which may explain her after-school tutoring sessions.

In the dark recesses of her chambers, she assumes her true form, a Lamia, and uses her abilities to drain students' emotions in exchange for knowledge. She does this through a flower-like appendage on her tail.

It's important to note that unlike other antagonists, she isn't inherently evil, but rather very passionate about the education of the academy's students, as well as the status between teachers and students.

She also seems to have a fetish for S&M outfits.

Ms. Ririko is a woman with light-colored hair (dark brown with an auburn tint in the anime) with circular glasses over her eyes. She usually wears a white v-neck shirt with a wide collar that reveals some of her cleavage and a dark skirt.

However, when she's tutoring somebody, she wears a dark leather bra attached to a leather skirt and dark leggings. To complete the outfit, she wears a pair of white heels.

Kagome first appears walking through the courtyard, where she listens to the students as they talk behind her back. Later, she's seen teaching her class, only to call on Tsukune to solve a problem. When he's unable to, she reprimands him for daydreaming before telling the class that the semester finals are coming up.

She then appears after Moka Akashiya has agreed to tutor Tsukune and has begun to suck of his blood, blaming her for Tsukune's absences in her class. She ignores Tsukune's denials before saying that she would tutor him after school.

When Tsukune comes in for his first lesson, he's very surprised to see what she's wearing (which she was wearing to help motivate him) When he calls her weird, she tells him that, as his sensei, she deserves respect and that the students are sensei's servants.

She later appears when Moka is trying to give her hand-made study guide to a hypnotized Tsukune. She angrily rips it out of Moka's hands, looks through it, and then throws it at her while demanding an answer as to why Moka is still meddling. She then leads Tsukune away for another study session, only to grow angry again when Tsukune starts to mutter Moka's name.

Ms. Ririko then wraps the opened flower-like extension of her tail on Tsukune's head before she begins to channel knowledge directly into his mind. She explains that, by doing this, he won't be able to think of anything besides his sensei and his studies while saying "it was for the best".

When Moka bursts into the room, she attacks her, saying that Moka would not get in their (her and Tsukune's) way any longer. After Moka has been sent tumbling over the floor, she mocks Moka by having Tsukune kiss her hand and remarks about the bond between sensei and student.

Moka then throws her hand-made book at her, which infuriates Ms. Ririko. After ripping the book apart with her tail, she then pins Moka to the wall before saying that she would make Moka her obedient student as well.

She's then outraged when Tsukune was able to resist her control before Moka`s rosario is removed. Inner Moka  tells Ririko Kagome that she's not her student before defeating her.

It is later revealed that similar events happened with the other students that she was tutoring. Because of this, she took a two-week suspension from teaching. Those that she tutored lost all of the knowledge that she had given them.

She reappears later (apparently not holding a grudge anymore) to warn Tsukune and Moka about Okuto Kotsubo. She even went as far as to say, "Other teachers aren't...as nice as me."

Ririko reappears along side with Nekonome in the final battle against Alucard destoying one of his clones.

In season one, Ririko is first seen briefly in episode 7 Snow Girl and A Vampire and then in episode 8 Math and a Vampire, where she tutors Tsukune Aono, but at a price. She makes him constantly come to the remedial classroom so she can tutor him. But it turns out that she humps him before attaching the flower-like appendage on her tail to Tsukune's head, and she shocks him so he will only focus on her and studying.

When Tsukune first visits the remedial classroom she says "Now then, why don't we start, Tsukune? My after school lessons are very strict." Then she leans in toward Tsukune and the scene ends with viewers just seeing the outside of the door and Tsukune screaming. Another example's later on in the episode she whips Tsukune because he mutters Moka's name and she instructs him to get on all fours, when he does, she sits on him then starts to hump him, she says "Go on... harder, rougher! And great, this feels great Tsukune-kun! Let today's special mission b-e-g-i-n! I'll teach you well today too." And again we see the outside while Tsukune screams. Once the scene fades back in, she says "It feels great, just like that Tsukune! It feels great! " and she mutters that throughout the scene, until Moka Akashiya arrives.

Lamia Physiology: As a lamia, Ms. Ririko has the upper body of a woman and the lower body of a serpent. She's proficient in using her tail as if it were some kind of whip while using it's flower-like extension to pin down enemies.

Ririko's true form in the anime. 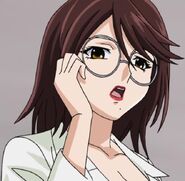 Add a photo to this gallery
Retrieved from "https://rosariovampire.fandom.com/wiki/Ririko_Kagome?oldid=30958"
Community content is available under CC-BY-SA unless otherwise noted.