A Monstrel (モストレル Mosutoreru?) is a Japanese-created wasei-eigo pseudo-word or made up word created by Akihisa Ikeda (池田晃久 Ikeda Akihisa?) (creator of Rosario + Vampire) to literally mean a hybrid ayashi or a hybrid Yokai. Their name is perhaps the word "monster" and a "mongrel", the English word "mongrel" literally meaning a type of dog with mixed breeds. Their nickname or moniker is "Outcast Ayashi". Monstrel or plural Monstrels are typically made up of many different parts of a monster or inbred, being monsters created by two different races of monsters getting together. They are typically either a hybrid or a fusion. 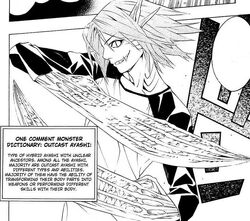 Type of hybrid ayashi with unclear ancestors. Among all the ayashi, majority are outcast ayashi with different types and abilities. Most of them have the ability of transforming their body parts into weapons or performing different skills with their body.

They have varying appearances, but most of the time, their Yōkai forms look like their human forms, with one or more modified body parts. Others, like Hokuto Kaneshiro, have anatomies that drastically differ from those of humans.

Like their appearances, these Yōkai have many different kinds of abilities, such as bladed hands, secreting mind-control serums, superhuman strength and agility, and an assortment of other powers. Due to their varying ancestry the power of Monstrels tend to vary greatly from low levels to those powerful enough to challenge S-class monsters.

Retrieved from "https://rosariovampire.fandom.com/wiki/Monstrel?oldid=28904"
Community content is available under CC-BY-SA unless otherwise noted.