Mizore Shirayuki is a Yuki-Onna who becomes part of the Newspaper Club at Yōkai Academy and one of the romantic admirers of Tsukune Aono who is a stalker that she has obsessive love for him.

When she was introduced, Mizore has long light purple hair (but she later cut it to shoulder-length), blue eyes that has a bit of purple at the top (her pupils are not black, but they are blue) and she is always seen with a lollipop in her mouth that helps maintain her body temperature. At school, she does not wear a uniform, she wears a light brown pleated checkered skirt, a white sweatshirt with long dark blue sleeves with a black singlet underneath, a yellow pendant, long dark & light purple striped stockings with white shoes and a belt tied to her left leg, but it is unknown what she keeps in the front pouch of her sweatshirt, though she has been known to keep her journal about Tsukune Aono there.

When she transforms into a Yuki-Onna, her appearance does not change, but her hands become wrapped in ice (which becomes ice claws) and her hair also transforms to ice sometimes.

When Mizore was first introduced, she was portrayed as a lonely, depressed and misunderstood girl. In the first semester she confessed her love to Okuto Kotsubo (Mizore's teacher), who then began to take advantage of her, which leads Mizore to freeze him. With the incident rumors spreading about her, but after meeting Tsukune Aono and becoming friends with everyone after a short bout between her and the vampire named Moka Akashiya, Mizore is shown to be a reserved girl with little emotion, which she only expresses when having moments with Tsukune. She starts to love Tsukune so much that she wants to have babies with him, even if she has to force him.

She is often seen stalking and hiding in different locations, which is often played up for comedic effects. (She often hides in amusing places; in bushes, under tables and occasionally within furniture). In addition, she gets into comedic arguments with Kurumu Kurono quite often, and they are often seen butting heads or having childish fist fights, though they remain to be close friends. For instance, when Mizore is forcefully kissed by Miyabi Fujisaki, Kurumu comforts her and prevents Mizore from committing suicide.

Mizore has several running gags; she prevents Moka and Tsukune from having tender moments together by flinging ice projectiles at them. Also, she appears unexpectedly in seemingly impracticable and/or otherwise unexpected places.

In the manga, we discover that Snow Women cannot have children after a certain age and Mizore is almost married off to Miyabi because of her village's practices. However, she's rescued by Tsukune and the others.

After Tsukune saves Mizore from getting killed by Kotsubo, her love for Tsukune becomes even stronger to the point that she admits that she loves him and wants to have children with him. Mizore even sneaks away from her side of the P.E. class to see Tsukune do his exercises. When doing so, she blushes, usually saying, "Tsukune, that was great." She sometimes refers to him as her "Beloved", to the point that it becomes somewhat habitual as the series progresses.

Under the influence of Lilith's Mirror Mizore acts in a very perverted manner; Talking about her breasts and flashing Tsukune. She describes her nipples as "like cherries" extensively.

Mizore may be the most sensitive when it comes to how many friends Tsukune has. On the occasion when Fang Fang tries to get Tsukune to join his family, she replied that if he gets one more friend to contest her love for him, she's going to stab him.

When we are first introduced to Mizore, we find out she has been obsessing about Tsukune Aono from afar where she tries to gain his affection by explaining to him that both of them were lonely, but Tsukune releases Inner Moka who kicks Mizore hard enough to stun her. Later that night two boys heading back to the dorm from their club heard and then saw a despondent Mizore. Upset, Mizore froze them in an emotional outburst. The next day Mr. Kotsubo said she'd not only frozen them but also seriously wounded them. When Tsukune told her what was said, Mizore admitted that she froze them in a huff but simmered down and thawed them, leaving them unharmed. Sad that Tsukune would think she'd hurt innocent people, she ran off to the cliffs alone. Mr. Kotsubo tried to attack her, but she accidentally pushed him off the cliff. He then assumed his true form (a kraken) and proceed to say he would kill Mizore, who realized he'd framed her. She hated Moka initially as Moka "got in her way" when it came to Tsukune's complete affection, but she eventually regains her sense of trust. After being saved she also begins stalking Tsukune on a daily basis.

During the summer before the second year, Mizore and Kurumu Kurono train with Ginei Morioka, practicing melee combat in an effort for the two to become strong enough to overcome Inner Moka in a fight. They have joint attacks called "Black and White" duet. In a later chapter, Mizore returns to her village, where there is a white flower which is used to lure the opposite sex. Mizore almost gets Tsukune Aono (Mizore is last seen hugging Tsukune on the ground with no clothes). She is then taken by the Snow Goddess and brought to the Snow Palace. There she is told she must marry Miyabi Fujisaki from the group Fairy Tale. Miyabi sexually assaults Mizore, causing Mizore to think of herself as unfit for Tsukune.

A later scene reveals she tried fighting back as the audience is shown a lot of ice shards scattered across the room. Still feeling as though she'll never again be suitable for Tsukune, she attempts suicide by jumping out of the window of the room she's found in. Kurumu dives after her and saves her just in time. Mizore begs Kurumu to let her go because she was kissed by a different man than the one she dreams of (Tsukune). Kurumu unexpectedly locks Mizore in a long, passionate kiss, trying to convince her that things will be okay and that she can still go on. Mizore returns to her quest to lure Tsukune (as his stalker). In Chapter 40, Mizore shows growth in maturity by saying that whether Tsukune chooses her as his lover or not, she will continue to be Tsukune's lover/stalker forever. She also notes that Kurumu can't deal with the possibility of Tsukune choosing Moka or another girl, since being a Succubus, being rejected by her Destined One will kill her.

Mizore returns to school after a delayed absence and shows an immediate interest in Tsukune Aono. In truth, she becomes infatuated with him, going so far as to create her own journal/scrapbook with all of his newspaper articles. She truly hated Moka Akashiya at first since she "got in her way" but she eventually regains her sense of trust, after Tsukune saved her from her loneliness. Unfortunately, this leads Mizore to stalk Tsukune on a daily basis. During the last few episodes of the season, she finds out (indirectly from Tsukune) that Tsukune is human. After that, she runs to the place where Tsukune saved her from her loneliness and starts to think about everything that has happened, wondering what she should do. Ruby Tōjō appears out of nowhere in her Raven form and helps to convince her to help him. She, along with Kurumu Kurono, Yukari Sendo, Moka and Ruby decide to stop the execution and save their beloved Tsukune, even if it meant losing their own lives.

During Year Two, Mizore still harbors feelings for Tsukune Aono and still stalks him. In one episode, she tries to attract Tsukune by learning how to cook curry, she becomes pretty decent at it, although it took hard work, and ends up making the curry in her own, signature way by using ice crystals instead of rice. Later on, she asks Tsukune to pretend to be her boyfriend for the sake of her mom, who starts getting ideas of marriage. While visiting the human realm, she, along with everyone else in Tsukune's harem (excluding Ruby) meets his mother. She battles Kurumu Kurono and Yukari Sendo to see who is more deserving of Tsukune (which ends with them all losing to Inner Moka). During the last few episodes, it is revealed through the Lilith Mirror, that her greatest desire is to be with Tsukune. However, he tells her, and everyone else (excluding Moka who was not with them at the time) that no one can replace Moka and that no one can replace them either. After that, together they overcome the effects of the mirror and defeat the spirit of the mirror.

After beating the spirit, the barrier that isolated the worlds from each other starts to fall apart and Moka sacrifices her rosary to stabilize the barrier. About a week later, Mizore can't stand to see Tsukune in so much pain, so she calls her mom and makes plans to have him marry into their family. A while after, everyone realizes that Tsukune left the school to see one of the Dark Lords and get another rosary for Moka. However, Tsurara Shirayuki decides to intervene as it would hinder her plans to have him marry into their family. But Mizore comes out of nowhere and says that she will stop her mom and do what she must for the one she loves because that is what she feels she must do. After the confrontation, she, along with everyone, finally witnesses Tsukune revive the Outer Moka and the two hug each other. At the end of the series, everyone, including Inner Moka (who was unleashed due to her sister stealing the Mirror again) holds Tsukune tightly.

As Mizore specializes in creation through the use of her ice, she usually creates weapons and attacks that involve ice when fighting on her own.

Another result of Mizore's training were developing some joint attacks, such as the "White and Black" duets, which she has developed with Kurumu Kurono. 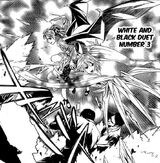 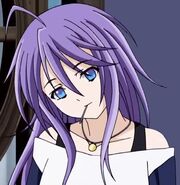 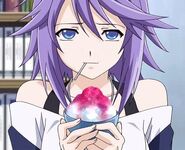 Mizore in the manga 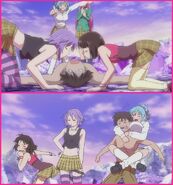 Mizore and Ruby Tōjō in bikinis

Mizore with Tsurara Shirayuki (Mizore's mother) hiding behind a desk

Mizore with an upset look and black pupils