Issa Shuzen (朱染 一茶 Shuzen Issa) is the father of Moka Akashiya and her three sisters of the Shuzen Family, as well as a very influential figure among Vampires. In Chapter 31, it is revealed that he is the leader of the Three Great Dark Lords, and the Shinso. Fittingly, he is incredibly powerful and a very capable combatant.

In the manga, Issa Shuzen is seen as the head of the Shuzen Family. In the flashback into Moka's memories, he is shown to own a fairly large European-styled castle, which is the meeting place for vampires in all of Japan, and is apparently well known in the yōkai underworld for being the one to go to when a problem needs to be 'solved'. He also fits the general expectation of what one expects a vampire of his status to look and behave. When Akua is first introduced, he seems to be caring enough to make sure that Moka, Kahlua, and Kokoa all introduce themselves formally to Akua. However, right after that, he tells Kahlua and Akua to 'fight each other' without holding back.

Touhou Fuhai explains that the Shuzen house is probably the most fearsome place in all of Japan due to the high number of vampires who live there. Based on Akua's attack and subsequent deduction of Kahlua's fury, Issa stopped the match with a loud clap.

The clap was with great strength, so strong that it choked Kahlua and Akua in fear. It appears he determined the strength of each of them within a minute of battle. When he is warned of the possible threat of intruders, he merely brushes it aside, believing it to be yet another attempt to try to kill him. He states that if they managed to get into the castle, that he will take their challenge personally.

Despite his brutal nature, he treats his family rather well, celebrating his daughters' birthdays with them. He even seems supportive of Akasha's plan to have Moka leave the mansion for fear of having something happen to her because of 'that thing in the basement'.

In the most recent chapters, Issa is revealed to be Fairy Tale's 2nd Subdivision Leader when Gyokuro says to Touhou Fuhai that his opponent was not her but rather behind him (referring to Issa). This is later disproven in Chapter 64 when Touhou Fuhai reveals 'Issa' to be a doppelganger and says that the real one is much stronger.

In Gyokuro's flashback, Issa is talking with Akasha who's holding her daughter Moka about humans and monsters coexisting. Issa finds Akasha's solution to be interesting and saying when that time comes he will be with both Akasha and Moka in the newly human world.

Issa appears later on in the Epilogue "After Story". It's revealed by Kokoa that Issa was imprisoned in Fairy Tale by Alucard because of Gyokuro's coup d'etat. After the great battle had ended with Alucard, Issa's been running around everywhere in Japan trying to rebuild the Shuzen Family once more by gathering new members.

Issa meets with Moka and Tsukune, commenting on how much she has grown. Tsukune nervously greets him, calling Issa father, leading to a furious aura out for blood with Tsukune comically shivering in fear as Issa is a powerful vampire, commenting, "I was wrong! Later, the three are seated at a bar table. He finds out that Tsukune was human and now a vampire. Issa asked Tsukune how he felt after hearing that he wasn't just close to Moka, but also some of the other girls. Tsukune hesitates, thinking of Outer Moka which Issa figures out. However, before Issa could question him about it, Kurumu, Mizore, Yukari, and Ruby interrupts them with their sexual appearances making Issa to believe that Tsukune has a harem, despite Tsukune's rejections to it as they were muffled by Kurumu's breasts and his nosebleed. Furious at his 'answer', Issa smashed the bar table. The group discovers the wanted poster of Tsukune and Issa claims that it's his and reveals himself to be an assassin to kill Tsukune. Moka tries to prevent Issa and Tsukune to clash, but Tsukune stands in front of everyone, willing to protect them with his life, glaring at Issa. Issa proceeds to attack Tsukune although kills a poisonous monster with a sharp needle that was sent by an assassin saving Tsukune's life.

Nurari comes to the scene revealing Issa to be on Tsukune's side and that him and the Shuzen Family will support and protect Tsukune taking out the assassins in Fairy Tale. Nurari also said that he hired Issa to become Tsukune's trainer since Tsukune had plenty to learn before becoming the next Headmaster, to which Issa gave a frightening smile that would make many folks' blood run cold. Nurari also tells Issa not to be too hard on him after Issa commented that Tsukune might be worth hazing.

After Tsukune's training, Issa revealed himself to be a polygamist and made a mess of things. Issa's tells Tsukune he's thankful to him and his friends for stopping Gyokuro and saving Moka. Issa also says that the woman who disappeared with Alucard was not Outer Moka, it was his wife, Akasha. Issa states that although Outer moka was his wife, the girl grew up as a part of Moka, living within her. He points out to Tsukune that Outer Moka's soul should still be inside of his daughter, that is if Tsukune still thinks of her since Issa believes that Tsukune was in love with Moka's Outer personality, which is not true. Since he considers her as a friend. 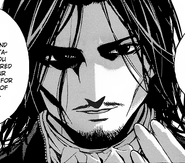 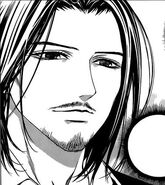 In this adaptation, Issa created Moka's Rosario Cross and the one used for the school barrier. His contempt for humans knows no bounds and, according to Koumori, his powers exceed that of a standard S-class yōkai, able to throw anyone with just a wave of his hand.

Moka's father resided in a vast castle when Tsukune Aono went in search of him for another Rosario cross. Upon meeting him, he disliked Tsukune because he chooses a "fake" Moka over his real daughter however he gains a respect for him once he takes the Rosario out of his hand without him knowing. As Inner Moka arrived and stopped the fight claiming that Tsukune would have lost if he kept fighting the way he was (she claimed if Issa was truly fighting seriously, Tsukune would have lost instantly). With this, he lets Tsukune keep the Rosario and he leaves, causing the castle to collapse. 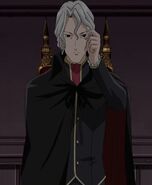 Vampirism: Though the full extent of Issa's powers are not shown he is mentioned by Touhou Fuhai, one of the Three Dark Lords, as having power far greater than an ordinary S-Class vampire. He was also referred to as the strongest vampire which was proven when he easily defeated Tsukune and leff him a bloody mess without receiving any injury. Though considering that Issa is not a Shinso vampire but has power that allows him to surpass the currently only living Shinso Vampires easily, he must have reached the pinnacle of vampiric potential and abilities.

Master Hand-to-Hand Combatant: Issa is extremely skilled in Hand-to-Hand Combat and an exceptionally powerful fighter with his immense speed,agillity,and strength,with Kokoa noting his combat level as being equal to that of the Three Dark Lords. This was proven when Issa is able to easily defeat Tsukune after he became a Shinso Vampire during training, in fact,Tsukune was unable to land a single hit on Issa while he reduced the latter to a bloody mess in their fight.