Ginei Morioka (森丘 銀影, Morioka Gin'ei) is a student at Yōkai Academy who happens to be a werewolf. As a werewolf, his powers reach its highest point when the full moon shines. Under a full moon, his power rivals vampires, the werewolf's natural enemy and his speed exceeds theirs. He is good friends with Haiji Miyamoto and a loyal person as he comes to the aid of the rest of his club members. However, Gin has a bad habit of being a pervert, which has earned him numerous beatings from Kurumu Kurono. In addition to being a werewolf, Ginei is also the former club president of the Newspaper Club.

Gin is a handsome young man with ink black hair that he wears a white headband (red headband in the anime) under his hair and light green eyes (reddish-brown eyes in the anime). He wears the standard male uniform, except for the tie, and his shirt is open a little which shows a wolf head pendant he wears around his neck. When he transforms into a werewolf, his appearance changes to that of an anthropomorphic wolf.

To look at him, one would think Ginei Morioka is a rather charming fellow. However, Ginei is rather girl-crazy almost to the point of being a total high-class pervert. At first, he was extremely attracted to Moka Akashiya and considered Tsukune Aono a rival for her affections. In the second part of Rosario + Vampire, Gin now seems to be attracted to Kurumu Kurono, mostly because of her G-cup breast size as he is often seen groping her whenever they meet. Gin also seems to have a long list of former girlfriends. Though Gin is the club president, he is a very lazy one, using to be normally absent and tending to leave all the work to his subordinates.

Despite his shallow and selfish behavior, Ginei is actually a quite caring person and a good friend. In his first year, however, he used to be extremely bearish and violent, only interested in fight. Because of this, he was known as "Mad Dog" Morioka. He slowly changed his mind thanks to San Otonashi, a graduate of Yōkai and the former newspaper club president. In the manga, he is shown to have feelings for San. During the Hong Kong journey he proved to really care about Kurumu too, looking after her while she was sick and trying to comfort the crying succubus after she realized Tsukune's true feelings towards Moka; in actuality, Gin felt quite bad for Kurumu.

Nevertheless, his loyalty is sincere and he values his comrades more than anything else, and is not above enduring excruciating pain, nor resorting to deadly force, for their sake. In conjunction with his werewolf attributes, this makes Gin both a great ally and a fearsome adversary.

After Gin is introduced by Shizuka Nekonome as a second year student and the Newspaper Club president, he gives Moka Akashiya and Kurumu Kurono each a bouquet of flowers. Following his charming demeanor, Kurumu clings to Tsukune Aono, as playboy types gave her the creeps. Gin later tries to ask Moka on a date, but Yukari Sendo uses her wand to throw a desk on his head. When the Student Police claim the Newspaper Club as a violation, Gin gives in to their demands due to what they did to the club last year. Later while the others are trying to rescue Tsukune he arrives to aid them in their efforts, managing to greatly damage the Student Police's leader Kuyō in a matter of seconds. He falls in battle by his opponents released form when protecting his club members from a fatal flame attack. He later joins the other members of the newspaper club on a trip to the human world. When Tsukune gets attacked by monstrels, Kurumu goes to Gin and, after he touches one of her breasts (and she punches him in the face), he tells Kurumu what he knows of them before putting a hand on each of her breasts.

It is revealed he was Kurumu Kurono and Mizore Shirayuki's sparring instructor, groping them at every session which upsets them to no end. When he was framed for ripping clothing at school he took the blame in order to prevent another student from getting in trouble and purposely insulted her so she could move on. He's good friends with San Otonashi, the original Newspaper club president, and in his first year he only fought and enjoyed fighting until she changed him. He also has a past with the Karate club leader, Haiji Miyamoto and with him, defeated an entire division of Fairy Tale. It is also revealed that Gin has romantic feelings for San, different from his usual perverted attractions. Besides Gin himself, the only other person who knows about this crush is Kurumu because she is the one who discovered it. He appeared later in Hong Kong with Ruby Tōjō, Kokoa Shuzen and Hajii to help Tsukune. Then, he took part in the Final Battle against Fairy Tail and Alucard, working in team with Haiji, Kokoa, Ling Ling Huang and Touhou Fuhai. Of the 2nd Team to besiege Fairy Tail HQ, seeing a Vampire mutate into a Ghoul, he was wounded shielding Haiji from the Ghoul's attack. Also, Gin, Haiji and Ling-Ling had to play dead so as to avoid being slaughtered. After the battle against Alucard, Gin is in bus with his friends happily greeting Tsukune's return and they all head back to the Academy. Gin eventually graduates from the Academy and currently works at the seaside inn where San lives.

Gin is first introduced by Shizuka Nekonome as the president of the Newspaper Club. He gives Moka Akashiya and Kurumu Kurono a bouquet of flowers and gives a single one to Yukari Sendo. He tries pinning the blame on Tsukune Aono as the peeping tom running around campus until he confronted Moka's inner self and lost when the full moon was hidden by the clouds. During summer break he is not seen because he apparently failed a few courses, which could possibly be because he is usually seen outside class spying on girls. At the end he is seen walking off the bus with Ruby in his arms. He is not seen again until the School Security try killing Tsukune, helping Inner Moka beat down Kuyō.

Gin makes minor appearances in the second season of the anime usually as a joke. On the first day of school, instead of aiding the others, who are being chased by Kokoa Shuzen, he decides to give Ruby Tōjō a photo shoot.

As Ruby tries to ban short skirts in the girls uniform, Gin instantly freaks since getting his "scoops" will be more difficult. Thus he had a one-on-one talk with Ruby but she suckered him into agreeing with her by using her body. After giving in to her ideals Gin still continued his picture hobby until he purposely tripped Tsukune and released Inner Moka for a photo shoot, but cause him to receive a beating for releasing her for no apparent signs of trouble.

He makes other minor appearances by trying to change his hairstyle to Tsukune's in a feeble attempt to impress the girls and banning Yukari Sendo from having a puppy which ripped apart the club. When Kōmori Nazo, in his human form, hypnotizes all of the females in the school, Gin tries to tell him off, only to end up as hypnotized as all the females. When Lilth's Mirror reverts him into his werewolf form, in addition, he is no longer hiding when taking his pictures and it showed his "true form" of being a pervert. This caused Moka to beat him upside the head to calm him down. He was also present during the season finale as he helped Nekonome and Ruby restrain Ageha Kurono (Kurumu's mother) and Tsurara Shirayuki (Mizore's mother).

Lycanthropy: The ability to transform into a wolf-like creature, at his will. When transformed, he gains the traits of werewolves, most obvious being ability to change into a wolf-like creature with the natural characteristics inherent to both wolves and humans, including senses, stamina, etc. In addition werewolves in Rosario + Vampire are often attributed speed far beyond those of vampires and they also have them even in their untransformed form. His condition grants him superhuman powers such as:

Expert Hand-to-Hand Combatant: He is an excellent fighter, although he has had no formal training. He was able to defeat the Headquarters of Fairy Tale's 7th Division with the help of Haiji Miyamoto during the day. He also has some expertise in dealing with occult and supernatural forces. He is widely regarded as one of the strongest top-tier yōkai at the school by the other students, earning him the name of "Mad Dog Morioka" as shown by defeated the entire group of yōkai students as Ginei was barely even injured, but prefers to keep out of the limelight. He is also the one who trained Kurumu and Mizore so they can fight against Moka in close combat.

Master Photographer: Ginei is a very skilled photographer as he was able to take several pictures of half-naked girls from different locations.

Expert Spy: Ginei is very good at looking at girls in the lockeroom, without getting caught.

Peerless Womanizer: He is a girls conqueror, who has several ex-girlfriends. He is also well-versed in the fine art of groping girls' "assets", and has incapacitated both Kurumu and Mizore at the same time in this manner.

Teamworker: When partnered up with Haiji, his overall speed compliments the crow tengu's strength and power over the wind. In their human forms, the duo displayed enough skill to overwhelm an entire division of fairy tale, minus the division's leader. Later, when fighting the Shuzen Vampire army, the duo showed their true chemistry and tactics, using Gin's sheer speed to knock down their foes and force the enemy into gathering into a single spot in an attempt to predict his movements by covering each others backs, in a sense corralling them like a sheep dog, thus landing them directly in the line of Haiji's gale fist and eliminating the entire group at once. 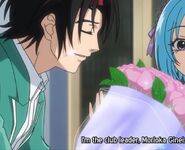 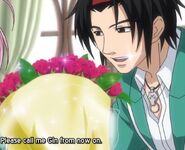 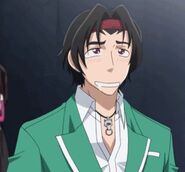 Gin’s perverted face
Add a photo to this gallery