Ghouls are those unfortunate enough to have monster blood injected into their bodies forcefully, only to be unable to contain it and transform into an unintelligent killing machine. Theoretically, the average Ghoul is actually a corpse that has been taken over by an evil spirit, but no ghouls have been seen yet that have awakened this way. This has led many to speculate that ghouls are actually of vampiric descent.

If a person injected with this much vampire blood does not become a vampire, then the only alternative is death, as said by Inner Moka.

A person's corpse that reanimates when possessed by a wicked spirit. Dead human flesh is it's favorite food and will dig up graves in order to eat the corpse's flesh. Ghouls love to attack children. They are also believed to be weakened by Holy Crosses. (Since the corpse is possessed by a demon.)

A Ghoul, if it is the result of a transfusion of vampiric blood, will have the bitemarks of the vampire who has injected blood into their veins. Coming from these bitemarks are long, dark skin lesions that wrap around the neck and face. After the transformation, the victim's eyes become pupiless and gain new dark rings under them.

Tsukune has the red tint in his hair that vampires have, but slightly darker. His eyebrows become more pointed and sharp, and he sprouts fangs when he transforms into a ghoul. In general, Tsukune's looks are very similar to that of a vampire, as he was unintentionally transformed into a ghoul by Inner Moka. However, it can be reasoned that ghouls that are born the traditional way look nothing like the above description, as they would not have any relation to vampires.

Ghouls have the strength and endurance of vampires, but not the common sense or thinking to use their abilities effectively. The result is that everyone, regardless of relation, is an enemy to a ghoul. It has been shown that after transforming, the ghoul has no memory of its former self, with the exception of the strong-willed. Even with a strong conscience, the person who became a ghoul is forced to watch what they have done, thus deepening the torture they endure.

Ghouls additionally possess a supernatural healing rate, being able to recover from the most grievous of injuries with little permanent damage. This, combined with the vampire's endurance, enables them to be able to take multiple direct hits without backing down, as shown during Tsukune's brief transformation and battle with Inner Moka.

They possess a strong blood-lust, and since they lack a conscience to hold them back, ghouls go on a killing spree as soon as they are released. Unlike vampires, they do not share their weakness to water. It has not been confirmed whether or not ghouls share other traditional vampire weaknesses. At present, the only known weakness a ghoul has are holy items, such as the Holy Lock that suppresses Tsukune's ghoul nature.

In short, ghouls have all the raw power and abilities that vampires do, and virtually none of the weaknesses, making them potentially even stronger than vampires. Only their lack of any cognitive function prevent them from becoming nearly unstoppable. 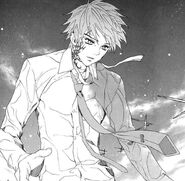 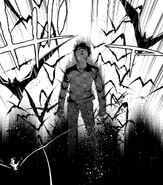 Retrieved from "https://rosariovampire.fandom.com/wiki/Ghoul?oldid=30924"
Community content is available under CC-BY-SA unless otherwise noted.